Retail Media can be profitable for brands – here’s how!

Retail Media can be profitable for brands – here’s how!
Retail Media networks are growing at a rapid pace, but brands are wondering about how to allocate their spend. Learn how i4i’s Robust Bayes™ approach to MMM can help.

MARK GARRATT – Retail Media is a rapidly growing channel. However, the top concerns of CPG marketers are whether RM is profitable and incremental to their business. Ultimate incrementality can only be determined by Marketing Mix Models (MMM). But unless you take account of the unique retailer footprint, your MMM value will likely be overstated, leading to money left on the table.

The 2022 Skai™ and BWG survey estimate that retail media networks will become the third-largest digital channel this year with projections of $100B in ad spend by 2024. Since 2020, this media channel has grown in both complexities and in the range of services offered to CPG manufacturers. The number of big retailers establishing their own networks grows at the rate of about one a month, and there are now multiple middle-layer agencies like Criteo, Citrus Ad, and Flywheel that are adding liquidity to the channel by allowing CPG companies to deploy spending across multiple retailers. As marketers rush to try out new capabilities, questions persist about profitability. According to the 2022 Skai™ survey, the top concern of senior managers is driving positive ROI (44% of those surveyed) and the second most important issue is proving incrementality (33%).

The High Peak and Sharp Tail of Retail Media: 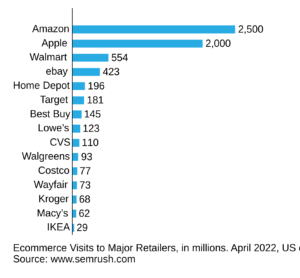 in4mation insights includes Retail Media as a standard media input in their CPG models. And that has made us aware of a very important phenomenon. The initial impact of retail media networks is impressive. The RoAS has a high peak. But ultimately, the impact at any one retailer faces a limit or a “ceiling” based on the number of people who can be reached through that retailer network, and hitting up against this ceiling causes a rapid drop in RoAS that we call the sharp tail. How does this happen? And does it happen the same way to all retailers?

For the digital founders of retail media networks (Amazon, Apple) this ceiling was high enough to not be a factor. The audience reached by Amazon per month is 65% of the population 18-65. Among the retailers, Walmart has the biggest footprint but below Walmart, the drop-off is considerable.

When we consider retail media, we first think of online shoppers, but the world is more integrated than that. People who see sponsored ads on Target.com may be looking for one thing and see another advertised. They may think about it for a while and pick it up the next time they are in the physical store. It is not just the online rankings that matter but also the percent of the target population who visit the brick-and-mortar stores, and the overlap between online and offline shopping. Retail media networks sustain profitability in proportion to the percent of people reached, and the percent of people reached is determined by both the online and offline customer base.

The following chart demonstrates the high peak and the sharp tail: 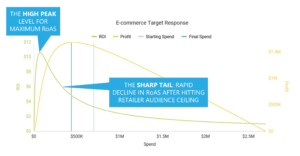 This chart is from our Optimetry™ software. It shows spend per week on the x-axis and return on ad spend (RoAS) on the y-axis (labeled ROI here). The green line is the marginal RoAS (revenue return on the next dollar spent on Retail Media) and the yellow line is the absolute profit. The data is for a large CPG manufacturer investing in the Target (Roundel) retail media network. The charts show that the marginal RoAS (green line) peaks out very early at around $100k per week spend. The RoAS level of over $10.00 attained is very high and that is good. However, the sharp decline in RoAS after that is due to reaching the hard ceiling on reach determined by the retailer’s customer base. This pattern will have an effect on optimizations. As you simulate spending more on retail media, there will reach a point where there is a media channel that improves overall profitability faster than retail media.

Other important factors to consider:

What is the in4mation insights advantage?

Retail media is yet another digital variable competing for space in an already crowded digital field. The hierarchical Bayes methods we use have the following advantages:

Retail Media Networks can be a highly profitable channel and will attract a lot of spend. But watch out for the sharp tail; it can easily become a channel where you overspend. Contact us at in4mation insights (info@in4ins.com) to help you assess the macro profitability for retail media across online and offline customers.

Mark Garratt is a partner and co-founder of in4mation insights. He is an accomplished analytics professional with a distinguished career in both business and academia. Mark has been a trusted advisor to some of the world’s biggest brands and an analytics leader at CPG companies including P&G, SABMiller Brewing, and The Gillette Company.

If you are an EU citizen or resident, please do not provide any personal information to in4mation insights at this time.

If you are a California resident, please do not provide any personal information to in4mation insights at this time.

Do you really wish to opt-out?